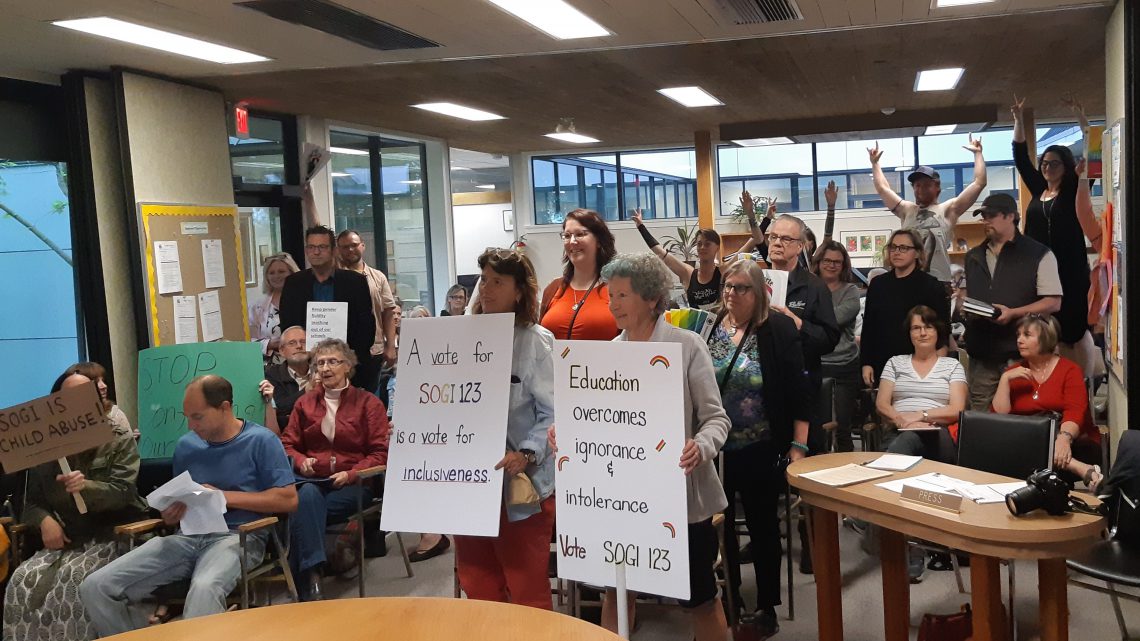 Sexual Orientation and Gender Identity (SOGI) is an initiative aimed at educating students and teachers on issues regarding gender and sexuality in school children. It is a program to increase understanding and inclusivity. Despite some heated opposition, the board passed the motion unanimously.

Sexual Orientation and Gender Identity (SOGI) is an initiative aimed at educating students and teachers on issues regarding gender and sexuality in school children.

The program has provoked heated debate throughout the province as well as in Campbell River.

The room was filled with both supporters of and those against the SOGI 123 initiative, the majority of each entered through different doors.

At the start of the meeting, board chairperson Susan Wilson reminded attendees to be respectful.

Richard Franklin was the first trustee to speak, and began by addressing the concerns the board had heard about the intentions of SOGI 123.

“Some suggest that homosexuality is a sign of mental illness or a dangerous lifestyle, or that the LGBTQ community is conspiring to recruit children,” he said, which caused some quiet laughter from the crowd.

“I respect people’s rights to have these beliefs. But I do not subscribe to this point of view.

Hopefully we can agree to disagree, without becoming disagreeable.”

Franklin went on to submit his support for the motion.

“Despite the threat to be unseated in the next election, I will not make decisions that I feel are contrary to the governance model of this school district,” said Franklin.

Trustee John Kerr also mentioned a threat to be unseated.

“I would like to address the statement circulated in the letter that was placed on the board table at the March 20th public meeting.”

“In part the letter stated that the Canadian Christian Lobby would attempt to defeat any trustee who did not actively oppose the use of SOGI material,” said Kerr.

“I wish to make my position very clear. I am in support the use of SOGI materials.”

Around the table, trustees voiced their thanks to those who had shared their beliefs and created a worthwhile conversation, before announcing their support for SOGI 123.

There were mixed reactions to the school board’s final decision.

Of the three public presentations that followed the decision, only one was in support of SOGI.

Mary Malinski, the mother of a bullied child, gave an emotional thank-you to the board for their approval.